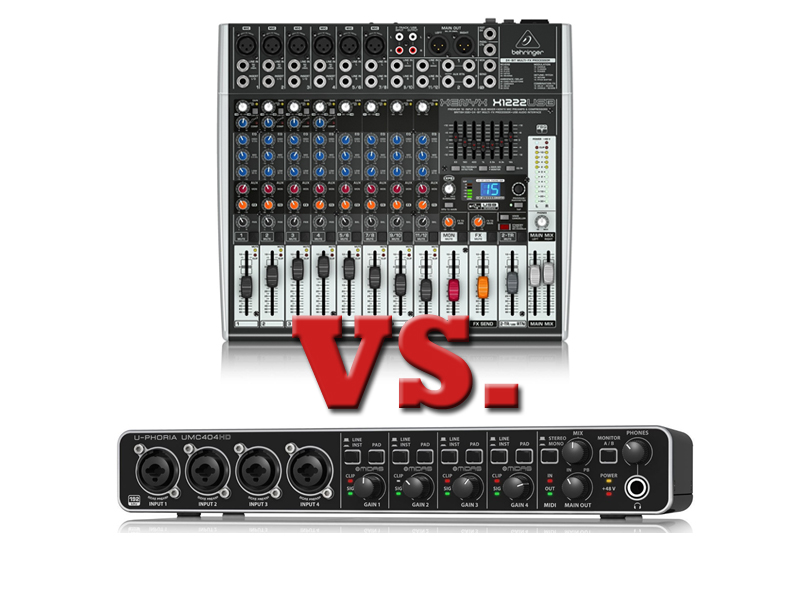 This article primarily covers the benefits of drawbacks of both USB mixers and audio interfaces for a professional digital home recording setup.  I’m writing this because I wish I could have known this stuff when I started going down this route.

I’ll also briefly cover the two things I think are crucial to achieving a professional sound, and how you can achieve that at home with the right choice of kit.

This is for you if:

– You want to achieve professional recordings

– You want to record multiple people playing at the same time

– You haven’t heard of dedicated interfaces

In my opinion, this relies on two things:

Quality is the obvious one here, and while there can be differences in quality between affordable mixers and interfaces, I’ve found that your sound quality will only ever be as good as the microphones you use, but that’s a whole other issue (you may also want to look at microphone placement techniques).

Flexibility is your ability to make changes to individual elements of your track.

Usually my recording sessions consist of a drummer, a midi instrument, and 1-3 other things (vocalists or instruments).

If I’m recording everything on one microphone, even if it’s the best microphone in the world, after it’s recorded, I can’t change the volume or add effects to say one singer for example, without affecting everyone else in the recording.

Our ideal situation is to get as many microphones as we can in to the computer as separate lanes/tracks.  That way, if I decide singer 2’s vocals are too quiet, or could do with some cool reverb, I can make my changes without affecting any of the other instruments, any time after the recording.  Which also leaves me open to remastering things if I get better software or learn better ways of mastering stuff in the future.

If you’re just taking your first dip in to more advanced recording, the last thing you want to do is overwhelm yourself with a bunch of different bits and pieces to plug in (I’ve been there, it’s a headache).  Also the less physical kit you have, the less you have to manage.  Therefore, regardless of whether you’re looking for a USB mixer or a dedicated interface, you should go for something that includes (at the very least):

So, what’s the difference?

The focus of the USB mixer, is the components that make up the mixer part, this could be on board effects, equalization, compression, making it compatible for a live PA etc.  With affordable USB mixers, there’s a very important catch.

Here’s a Behringer Xenyx X1222 USB mixer.  Compared to a lot of other mixers I’ve seen, this one comes at a great price with all the features it has. 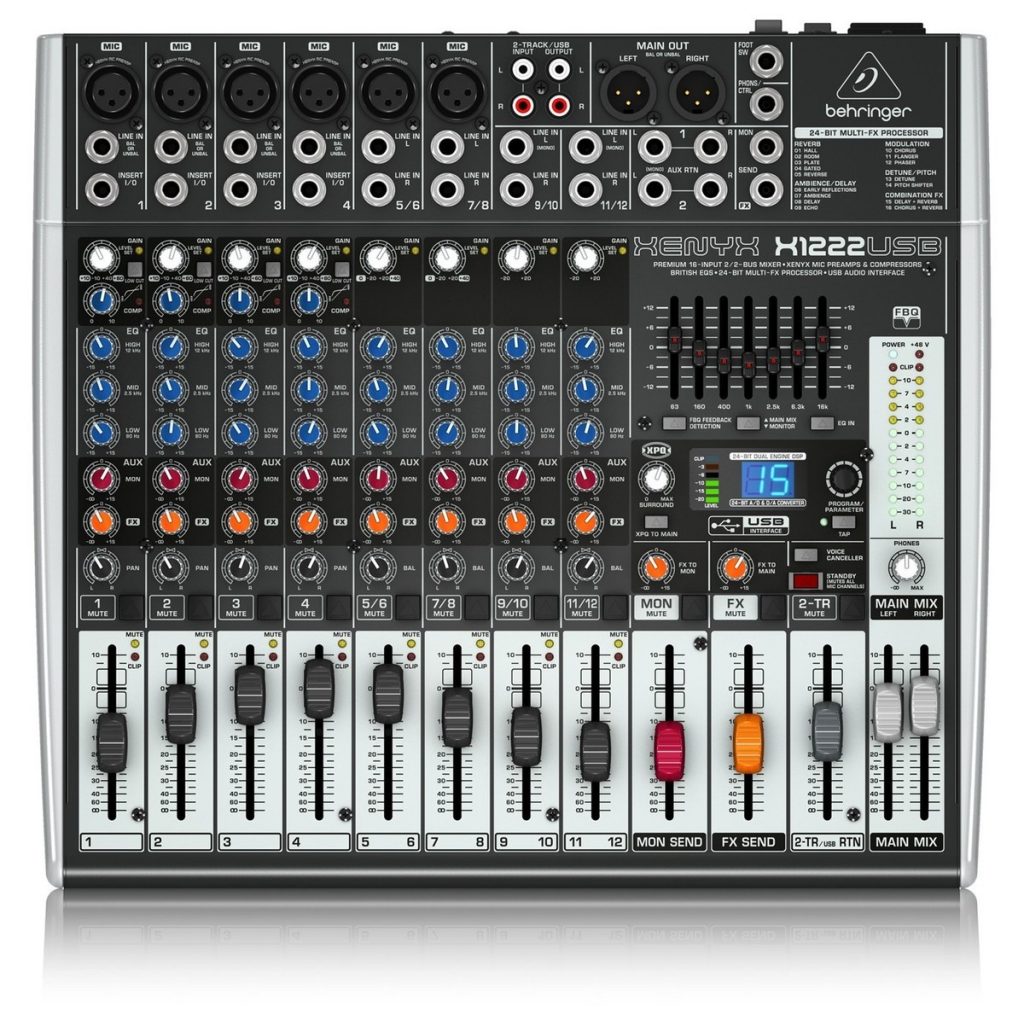 This is advertised as a 12-track mixer, we have 4 mono inputs, and 4 stereo inputs (which can also be used as up to 8 mono inputs) [A little guide to mono and stereo].  When you plug in the mixer to your computer, how many separate digital channels/lanes do you think we’ll get?  The answer for this model, and most other affordable models, is two.  One for left, and one for right (Stereo output).  So, when you plug in the mixer and open your recording software, you’ll see one device representing your mixer, with two separate mic inputs to choose to record from.

This essentially means we must share our 12 inputs between two digital channels, if you never intend on digitally recording more than two microphones or analog instruments (e.g. electric or acoustic guitar), this is fine. You can pan one input full left, and the other fully to the right (separating them completely when you record).  But if you want to record more than two things on separate tracks, and you want to achieve professional flexibility, then you may want to consider an interface.

SIDE NOTE:  Don’t forget you have the option to record each layer of a song in separate takes (e.g. drummer records first, then guitarist plays on top of the drums etc.).  But for some things, everyone playing together at the same time is unrivalled.

Another consideration is the output quality of the built-in interface, on this model (and again most affordable models), we get a 16-bit digital output.  That’s not bad, but it’s not album or industry standard quality.  That said, I’ve been using two mixers with 16-bit interfaces for recording for quite a while now, and I’ve personally been very satisfied with the quality of the sound.

Here’s the Behringer U-PHORIA UMC404HD interface (honestly, I am not sponsored by Behringer I just like their stuff).

This one has 4 separate jack/XLR inputs, each with their own gain control.  But as you can see there’s no effects unit, no compression or equalization for any channels etc.  This is a bare bones interface.  But that comes with its own benefits.  The major benefit?  When you plug it in to your computer, you’ll see one device, with 4 separate mic inputs to choose from.  So, whatever you plug in to this will be digitally separated, that my friends is instant flexibility!

Another major benefit here, this interface gives a 24-bit digital output to your computer, with a sampling rate of 192kHz, which is the current industry standard in production at the time of writing.

You’ll see many dedicated audio interfaces that also support a MIDI input, here’s the midi input on the back of this one:

That means if you’re using any kind of midi instrument (keyboard, controller etc.), you can plug that strait in to here and everything you need for your recording is all managed by one single device, minimising the number of USB cables you need to connect to your computer.

It almost seems like the interface is the obvious choice, but there are a couple more important considerations to note before you jump right in and buy one.

When you’re working on your levels or want to hit that record button, you, and whoever’s playing may want to hear what’s coming through the microphones, or you might want to play a click track that only the instrumentalists can hear.  When I’m recording, I have all the microphones (apart from the drum mics) coming through several sets of headphones so that everyone has a good level on the instruments, and a click track to keep us tight.

There are two options when it comes to monitoring your sound.  You can either:

Manage your monitoring outside the computer (analog),

or you can manage it digitally.

When you monitor digitally, your options for what you can do are governed by the digital audio workstation (DAW) you’re using, it also adds an extra layer of complexity at the computer level.  If you prefer tweaking physical dials, you might want to consider analog monitoring.  Not to mention digital monitoring also gives your computer a slightly heavier workload.

With analog monitoring, that is monitoring sound using your mixer/interface, your options are governed by your interface/mixer.  Most affordable interfaces and mixers have separate monitor channels, but I’ve found that USB Mixers provide a lot more flexibility with their monitoring options.  Doing it this way instead of digitally also gives your computer a little less work to do.

Most of the time I personally use analog monitoring.  Because I’m using USB mixers for my recordings, I have several noteworthy benefits for monitoring over using an affordable interface:

You may like the idea of applying live effects to the sound you’re hearing, and you’d be right to, it’s cool.  This is possible in the digital world, but that depends entirely on the software you use.

I’m currently using the latest version of Propellerhead’s Reason (paid software), which does support real-time effects processing.  But again, the fancier the things you do to your live sound in your computer, the more work your computer must do (which could impact performance/quality).

Although most decent free recording software will let you add effects afterwards, so it’s not the end of the world if you can’t get real time effects!

SIDE NOTE:  If you’re already using recording software you like, have a google to see if it supports real-time effects processing (it can’t hurt, right?)

In summary, if you’re just starting out and you don’t like the idea of spending hundreds of pounds on software just now, analog monitoring may be best for you.

Best of Both Worlds

At this point you may be thinking “I want multiple digital outputs, AND I want to manage my monitoring and effects through my devices instead of digitally”, and maybe you want industry standard quality too.  Well this is also an option, but you’ll either:

And it can get a bit fiddly.

At this point it’s worth mentioning that to do this, you won’t need a USB mixer, because we’d already have an interface (this really opens your options).  But what would be ideal is a mixer with individual physical analog outputs for each input channel.

Doing this means you can plug your mics/instruments in to the mixer first, then from the mixer in to the interface.  Why do we want that?  Well because we can plug our speakers in to the mixer directly, and apply effects to our mics, without affecting the main sound that’s going from each mixer input’s output, to each interface input (that’s a hell of a sentence).

You may be thinking that having 2-4 digital outputs really isn’t a lot, especially if you’re recording drums with other things.  Well you’d be right, but sadly interfaces with more than 4 separate inputs really start to get expensive.  If you don’t want to spend loads of money, there are little compromises you can make whilst still maintaining a decent level of flexibility.

For example, I have decided to make a compromise on my drum recordings, whereby I combine all the drum microphones in to a single digital track and just make damn sure I have all the levels right.  If I didn’t do this, most of my digital channels would be taken up by drums.  Doing this I still get nice sounding recordings with a good deal of flexibility, and I have an extra three channels left over for other people to join in.

But be careful making compromises, sometimes they really don’t work out great.  Once I tried to lump two vocalists together on the same digital track, and when one vocalist got more enthusiastic than the other “in the moment”, the balance between the vocals was lost and there was nothing I could do about it.

It’s all about little experiments here and there, and always remembering that people’s levels can always change in the moment.

So, what should I do? (Summary)

If you like the idea of having separate, high quality audio tracks coming from your device, you’re happy to manage monitoring your sound digitally, and you want industry standard quality, a dedicated audio interface is for you.

If you don’t mind having only two digital outputs, you want to manage your monitoring and effects outside of the computer, and you’re happy with CD quality sound, the USB mixer is for you.

If you want separate audio tracks from your device, you want to manage your monitoring and effects outside the computer, and you want industry standard quality, you could combine both.

If you’re still not sure, or there’s something you feel I’ve missed, then feel free to ask for advice or add your knowledge in the comments section, I’m always happy to help and really appreciate feedback.